Millennium Falck announces a new album is in the works

Finnish synthwave artist Millennium Falck announces that he is working on his new album, “Blades of Gold”

Helsinki, Finland – Finnish synthwave artist Millennium Falck is thrilled to announce that he is working on his third album, “Blades of Gold.” The album, set to release in May 2023 features a full-length, story-driven concept about a futuristic laser hockey game in the year 2088.

“Blades of Gold” takes listeners on a journey through a thrilling, high-stakes match between a human team and a robot team, set in a similar setting as the iconic 1980 Lake Placid Olympic final. The album’s mesmerizing synthwave soundscapes and powerful storytelling transport listeners to the year 2088, immersing them in the intense, action-packed world of laser hockey.

“I’m excited to share this new story in my Neo Helsinki storyline. It continues to open up the futuristic world of Helsinki.” said Millennium Falck. “I’ve put a lot of time and energy into creating a truly immersive experience that explores the intersection of humanity and technology in a futuristic sports setting. I can’t wait for listeners to join me on this journey.”

“Blades of Gold” is now in the making and pre-orders will be announced during the upcoming months. The album will be released through our new record label Neo Helsinki Records. 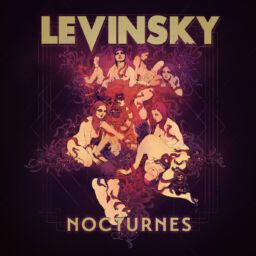 ‘Nocturnes’, a collection of songs for the night marks the return of Levinsky, Finland’s auteur of dark and dreamlike electronic…